So I try to stay positive and upbeat, because that's honestly just who I am. But with 2012 approaching, the doom and gloom is really setting my brain to whirl. I want to make it clear, I do not believe some cataclysmic event is going to wipe out the earth next year. That's not to say Mother Nature can't or won't strike, but I don't think the Mayans somehow know exactly what day this old world will stop spinning.

That said, I've learned some things recently that definitely made me stop and think. I've already told you I watch to much History Channel. And this addiction has brought me a slew of "How the World Will End in 2012" shows, though they have less ominous titles, of course. Some of these have made me stop and think,while others make me laugh. So today, I thought I'd share the top three scenarios that I think could actually happen (but probably won't).

Theory #1: Sun flares
It's no secret to most people that periodically, storms on the sun result in flares that can interfere with communication. Anyone with a satelite dish is aware of this annoyance. But what a lot of people don't know is the most active region of the sun will be pointed at the Earth like a shotgun in 2012. That's enough to make you to stop and think on it's own. But we are also due for what they call a mega-flare, which only happens every thousand years or so. What can solar flares do? No, they can not single-handedly destroy the Earth. In fact they can't directly harm us in any way. So why is this a possible scenario? Because they CAN destroy all of our electronics. And I do mean all. So not just your Facebook and texting addictions are in danger. Your car won't work unless it predates the computer era. Your faucet won't have any water for you because the pumps that send water to it are useless. No light, no communication, no grocery stores. You would have to learn to live off the land. And in some places, like where I live in Illinois, that wouldn't be too hard. But what about the folks in LA, or New York? Could you survive a winter without heat? How many of you even have a hand operated can opener. This would quickly break down the human mentality to survival mode, and that won't be pretty.

Theory #2
Global warming is coming. The ice caps are melting. This isn't Al Gore's propaganda, it's a proven fact. And because of the increased weight on the tectonic plates, world shattering earthquakes are eminent. Volcanoes will fill the atmosphere with ash, choking out the sun. Tsunamis will alter our coastlines forever, leaving large swathes of continents underwater. The raising water also raises sea level, so even more land will be lost. This actually fits the Mayan predictions. 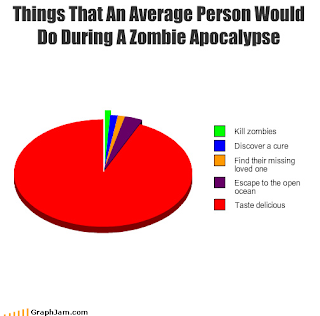 The zombies are coming. Are you prepared? Forget asking Santa for a new puppy or a fast car, I'm asking for an oozie! Remember you don't have to run the fastest, you just can't run the slowest. Even now the government is working on a secret experiment that will escape sometime around Thanksgiving next year. The contagion will spread, devouring millions of people who will then help devour more. Resistance is futile and the only safe place is with those of us who saw it coming and have our zombie survival plan. And no, there's no more room in my shelter.

Of all of these scenarios, I think the final one is most likely. As a human service, I have shared this instructional video to help you survive the holidays. Also, watching Zombieland while taking notes probably couldn't hurt. :)

Posted by Elizabeth Sharp at 12:19 PM