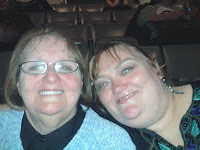 Still playing catch up from yesterday, so bear with me folks. Had a blast with my Mom yesterday and Rum Tum Tugger gave me an idea for a character for Second Nature. I need to work on editing Natural Selection and finishing Performance Machine before I start any new projects. And I have several I want to do, but I'm making myself finish this trilogy because I hate when authors make me wait while they work on other projects. Not judging, just saying. ;)

I had a wonderful find last night after I got home that made me giggle with glee. I was trying to find an ancient story I wrote for the HPers and while going through the drawer I found some other stories I had forgotten about. One of them is a short story that might be predictable and was a glorified homage to two guys I had a crush on in high school. And for the record, I graduated in 1997, so this story predates Sixth Sense. Maybe it's why I saw the ending coming. :) I am planning on getting it typed and posting it her for Sample Sunday.
The other thing I found was the book I was writing with my best friend Valerie back in high school. I always thought it was pretty horrible, but reading through it last night, it definitely has some good stuff in there. It says a lot about our differences. Before I can go into explaining that, here's the blurb.
In a world torn by war, a desperate and drastic plan is launched to end the violence. One citizen of each country is brought together with the others without knowing their grand purpose. They think they are merely going on a cruise, but in reality they are stranded on a deserted island specielly found and prepared for them. Now they have to learn to get along in order to survive. Can they learn to put the hatred that has been bred into them aside, or will old angers destroy the world's only hope.
Now how these eight people were supposed to make peace once they returned I don't know, nor do I know why they were selected. I think they were all somehow tied to the rulers of their countries or something like that. Don't get me wrong it's completely slavagable and worth a revisit someday.
So finally back to what it say about our differences. All Valerie's characeers are jaded, fiery and aggressive, coming into the tale ready to fight. Mine are all troubled and abused yet still innocent, using the cruise to escape their troubles. This is a major testament to who we were/are. If you want to read more about our relationship and history together, check out my personal blog where I will write about her when I finish here. But this is about our story. I might go back and work on it because it has potential. I wonder if it can be revamped and made better. Maybe someday it will get published. I think on of the biggest things that needs to be changed is the way it was written. We each created four characters and when we wrote we wrote the scenes for our characters. I remember Val getting annoyed because of my habit of turning everything into a romance. I think I wrote on it more than her, but mostly because I had it most the time and she actually pretended to pay attention in class. ;) It was before the internet and neither of us had a typewriter, let alone a computer! I don't know if I had a point talking about it, so if I rambled it's ok cause it's my blog, not my book. ;)
Posted by Elizabeth Sharp at 10:18 AM